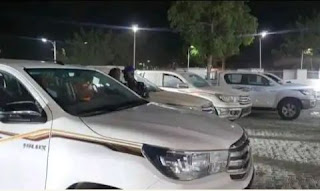 This was contained in a statement issued in Gusau on Saturday and signed by the Press Secretary to Governor Bello Matawalle, Jamilu Birnin-Magaji.

The Zamfara State government has donated five new Hilux vehicles to the Government of the Niger Republic for special security border patrol.

This was contained in a statement issued in Gusau on Saturday and signed by the Press Secretary to Governor Bello Matawalle, Jamilu Birnin-Magaji.

Birnin-Magaji said the donation was in fulfilment of a pledge by Matawalle to support the country with patrol vehicles and other security logistics in the fight against banditry.

“The vehicles were presented by Governor Matawalle to the Governor of Maradi Region, Alhaji Abubakar Shu’aibou, at a ceremony held at Government House, Gusau.”

The governor said the vehicles were to provide special border patrol at Maradi and other parts of the Niger Republic which share borders with Zamfara, Katsina and Sokoto.

Responding, the governor of Maradi Region, Shu’aibou, assured Matawalle that the vehicles will be used to fight bandits and “other heinous crimes, particularly along the Maradi border.”

In December 2021, Matawalle visited President Mohamed Bazoum of the Niger Republic in Niamey, where the two leaders resolved to explore more areas of cooperation.

Related Topics:
Up Next

Oyo Mesi: Why Alaafin Was Not Buried Like Other Obas