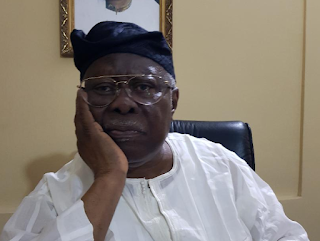 Nigerian politics is a game of mud-slinging, name-shaming, and other antics that can only be endured by a few thick-skinned individuals with the impregnable character to navigate the cesspool of drama without slipping. These select individuals are innate politicians. They thrive in the stench of the fermenting chaos and launch relentless tirades of ripostes at one another.

No match-up has demonstrated this theory like the protracted hurling of jibes at Bola Tinubu, an All Progressives Congress (APC) presidential hopeful, by Bode George, a chieftain of the Peoples Democratic Party (PDP). Their dislike for each other brewed when Tinubu was still governor of Lagos and George was the most prominent voice in the state’s PDP and his direct opposition.

With years gone by, George never reined in his attack on Tinubu. Although he has repeatedly said he has no personal issue with Tinubu, the PDP chieftain has refused to stop his jibes while also accusing the former Lagos governor of corruption during and after his tenure.

In 2015, ahead of the presidential election, George promised to “go on exile” if the then newly-formed APC gets into power because Tinubu “will just order that I should be picked up”.

“If Bola Tinubu finds his way into the national government, I will go on exile. He hasn’t the temerity and the calmness of mind. They don’t even know what to do in power. Because the vice-president is his boy, he will just order that Bode George should be picked up,” he had said.

APC won the election but he ducked his promise.

Fast forward to the lead up to the 2023 presidential election and Tinubu unveiling his ambition, George has resumed attacks on his longtime political foe while repeatedly promising to leave Nigeria if he gets the seat of power in Aso Rock.

In the past two years, George had made that promise at least five times in different variations.

[b]‘I’LL DUMP NIGERIA FOR TOGO’In February 2020, when the presidential ambition of Tinubu had not been made public, Goerge, in a chat with PUNCH, attacked the idea. He described it as a “challenge” and the “most illogical and most disruptive issue”.He then added that “I will disown Nigeria to take the citizenship of Togo or any other country” if Tinubu becomes the president.“It is a challenge. It would be the most illogical and most disruptive issue to have him (Tinubu) elected as President. If this happens, I will disown Nigeria to take the citizenship of Togo or any other country,” he said.“Look, what this fellow did in my state, all the lies and the most painful thing was that on the day of the election (2019 election), two bullion vans drove in the daylight to his house.”‘I’LL CEASE TO BE NIGERIAN’On May 7, 2021, during a chat with Arise TV, George echoed his stand that he will cease to be a Nigerian should Tinubu get the presidency.He then called on the Economic and Financial Crimes Commission (EFCC) to investigate Tinubu’s tenure as Lagos governor and his alleged involvement with Alpha Beta Consulting, a tax firm.“I’ve talked about it, and I’m still saying publicly that the EFCC should go urgently and investigate Alpha Beta Company owned by him,” he had said.“We must make sure that they investigate him. He’s junketing all over the place—an insult to the civilised minds who work so hard in this country. If by whatever yardstick, he becomes the head of state, I will cease to be a Nigerian, and I’m not joking.”‘I’LL RENOUNCE MY NIGERIAN CITIZENSHIP’
A couple of months later, George reaffirmed his promise again. In another chat with Arise TV, He said people pushing for Tinubu to emerge president in 2023 need medical examination, adding that he would rather cease to be a Nigerian than see Tinubu become the president.“I will do whatever is necessary to review and renounce my citizenship if that happens. That kind of fellow? Do you think Lagos is better off? We live here. Look at the state. No drains. Look at what they put at the bar beach,” the PDP chieftain said.“What is going on? This is my state. We have people who are former governors. If they’d behaved like what he is doing, they’d have been nothing to him.“So, to have in my head that that kind of character is nominated to be Nigeria’s president… Please, go check all of them [Tinubu supporters]. Something is wrong with them.”‘I’LL MOVE AWAY FROM NIGERIA’In January 2022, after Tinubu had announced his presidential bid to the country, Bode went at him again. In a chat with Vanguard, he said Tinubu is “not the kind of person we can hand over this massive country to manage”.“I will move away from Nigeria. I’ll leave because he will be your representative in the international plain. Which investment will he bring here? I am not talking because I have any hatred for him,” he said.“This is not the kind of person we can hand over this massive country to manage. He will be the greatest joke on the international plane. We should bother who should lead us.”‘I WON’T BE PART OF THIS COUNTRY’At a press briefing on March 19, 2022, George reiterated that his promise to leave Nigeria if Tinubu becomes president is no joke. He said he’ll leave the country and “be watching with binoculars from afar”.He accused Tinubu of nepotism while questioning the reverence of the APC chieftain.“If by whatever chance he gets to the villa, I won’t be part of this country. And I am not joking. I can go to Ghana and be watching with binoculars from afar. You will see what will happen,” he said.“His wife will now be senate president. His son will be Governor of Lagos. His daughter will be Iyaloja of Nigeria.“What has he done to prove that he deserves to be honoured by anybody in this country?”

Related Topics:
Up Next

Oyo Mesi: Why Alaafin Was Not Buried Like Other Obas